I had heard of the Portola expedition but didn’t remember what it was, and hadn’t really understood it to begin with. But when it was brought to my attention that an event would take place to mark the expedition’s 250th anniversary, I signed up. Hey, what better way to learn a little California history? The result is in Wednesday’s back-from-vacation column. 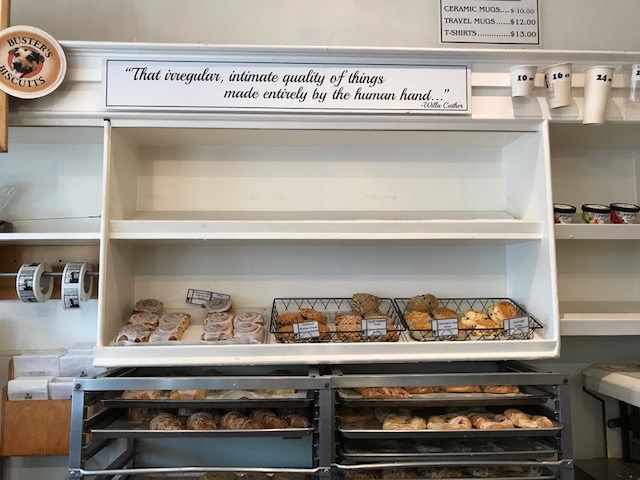 This quote by the author, who’s been cited in my Reading Log posts, decorates a display case at Some Crust Bakery in Claremont.

This is a rare view of the usually busy bakery with no one in the way. Within seconds, people entered from all sides.

The Nebraska-raised Cather never visited Claremont, but she did visit Los Angeles once, and hated it. Perhaps she would have been more kindly disposed if she had come out to Claremont.

I’m off this week, beating the heat in the Pacific Northwest and returning to the blog July 29. (For you Reading Log aficionados, I’m midway through two books that I’m toting with me with confidence of finishing.) 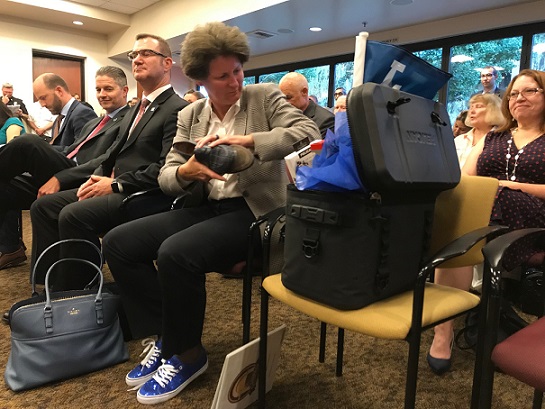 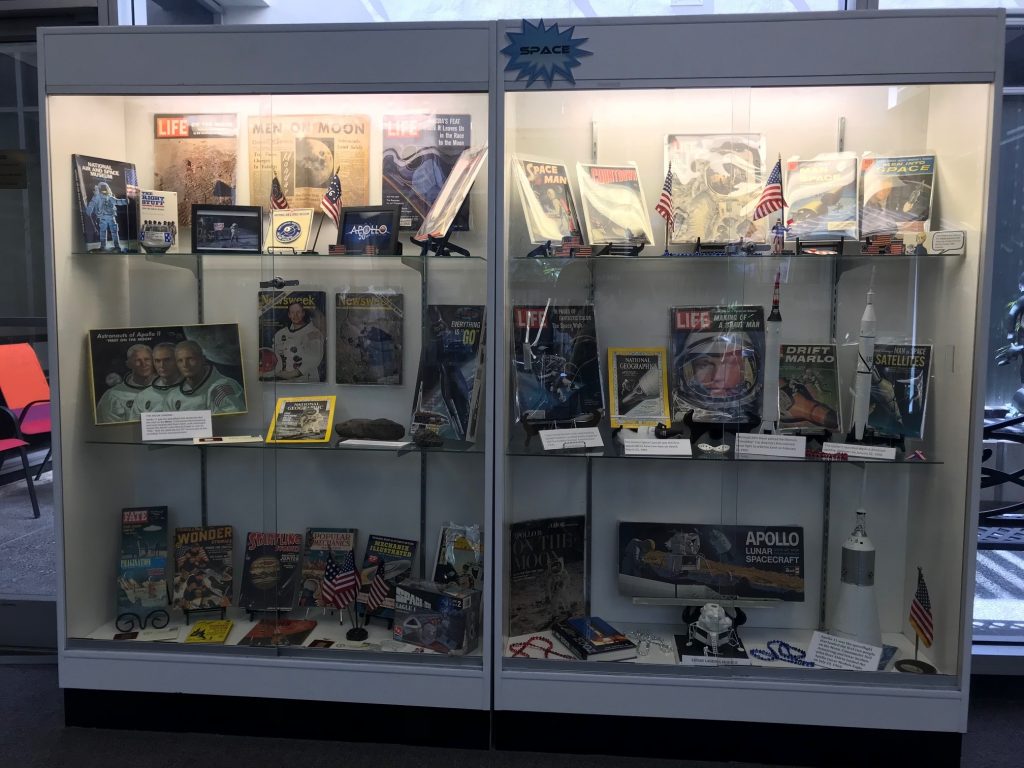 These display cases at the Pomona Public Library are devoted to the Moon missions via magazines, toys, comic books, games and more from the era, courtesy of collector John Atwater. It’s a fun reminder, or history lesson, of the excitement of the space race. Click on the photo for a larger view. For an even larger view, visit the library!

I took this photo a few weeks ago and am belatedly sharing it in honor of the July 20, 1969, moon landing.

“American Idol” runner-up Alejandro Aranda ended his modest national tour of a half-dozen small venues with shows Wednesday and Thursday at the Glass House in his native Pomona. I was there for Wednesday’s concert and collected show tidbits and anecdotes from concertgoers, some of whom came a loooong way to see him. The result is Friday’s column.

Stats corner: Of my Top 5 most-read columns online in 2019, four are about Aranda. No. 4 is about Golden Spur in Glendora. 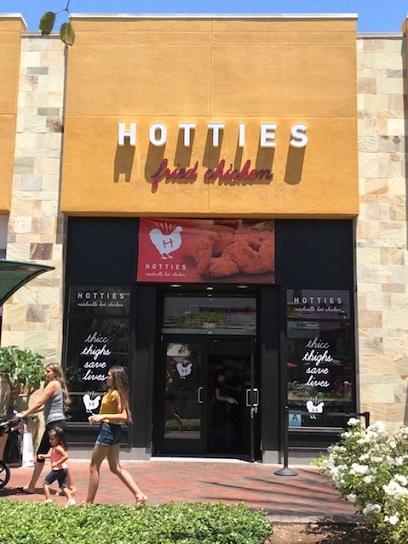 I learned about Hotties from The New Diner blog; he doesn’t eat chicken, but he liked the mac and cheese. Me, I’ll eat almost anything, even in far-away Chino Hills. My interest was further stirred when the LA Times Food section had a mention of the shop, owned by Michael Pham and John Park, and alleged lines out the door in a piece about the Nashville hot chicken craze.

In Chino Hills for a recent assignment, I decided to eat lunch before heading to the office and remembered I wanted to visit Hotties. It’s in the Shoppes at Chino Hills outdoor mall, near Pinkberry (there are still Pinkberry shops, evidently) and a chicken wing’s throw from Barnes & Noble.

There was no line on a Wednesday right after opening, but the restaurant is small enough that if there were four people in line, it would reach the door. You order at the counter and there is limited seating, a couple of high top tables and a few window seats at a counter. The menu is short: combos with two or three pieces of chicken, two sliders or two tenders, all with fries, plus sides of truffle mac and cheese, fries and slaw.

I went with the two tender combo ($8.50) with hot shake fries, ordering the chicken with mild spice, as opposed to no spice, medium, spicy or fire (the latter has ghost pepper). My meal arrived a few minutes later in a white box with a checkerboard liner. 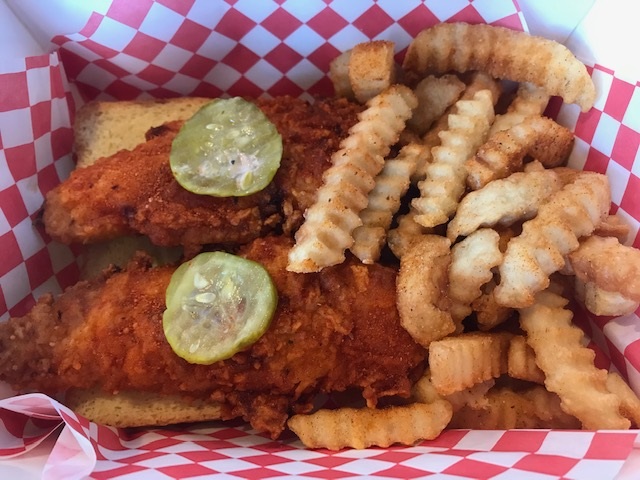 Inside were two tenders atop a fat slice of white bread, two pickles on top, with crinkle-cut fries seasoned with “Cajun spices,” very good. I alternated between picking up the tenders and cutting them with a knife and fork to eat them along with the bread. They were seasoned just right for my mild tastes with a dusting of cayenne pepper and paprika. The lightly fried skin tended to come off, but it fell into the box, so no harm done.

Having waited in line 2 1/2 hours at Chinatown’s famous Howlin’ Ray’s, the place that started the hot chicken trend in L.A., I can state that the style and presentation closely follow Howlin’ Ray’s, that the food is very good but not up to that level, and that waiting in no line close to home is far superior. There’s a chart at the counter, by the way, that marks the wait time after ordering: 10 minutes, 15, 20, 25 or 30-plus.

If you ordered your food too spicy, Hotties has no desserts, but Afters Ice Cream is across the way. Or there’s Pinkberry almost next door. 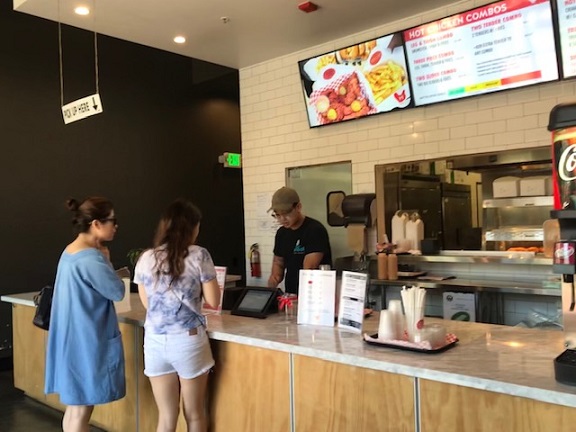 I used to be a regular at San Diego Comic-Con, but I quit when the event started getting overwhelming and the attention shifted from comics. This wasn’t a topic I had ever thought of addressing until being in San Diego last month, seeing the 50th anniversary banners on lampposts and thinking, Huh, maybe the milestone would be a good excuse to look back. And thus I bring you: Wednesday’s column. 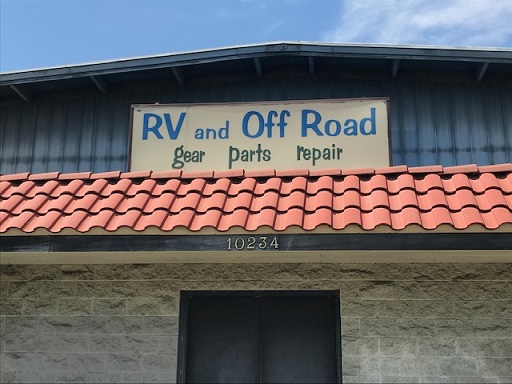 Since our office used to be on Fourth Street in Ontario, and now is only a bit farther east at Archibald and Fourth, I’ve passed this RV and Off Road shop at 10234 E. Fourth for, it seems, my entire 22 years here.

I don’t know the first thing about this shop, other than “gear, parts, repair,” but the sign’s lettering always caught my eye. And I have a recollection that in its latter days there was a cross on the facade, presumably to signal that the owner would treat you fairly.

It’s been closed a while with a construction fence around it. I’d meant to stop for a photo for posterity, but there was no obvious place to park. Recently, though, driving east to lunch past the building, I realized I could park at the Havengate complex immediately east at Center and Fourth streets. On my way back, I made a point of doing so.

According to the official sign, the building is going to be demolished for a new one at 58,000 square feet for industrial, office, manufacturing and warehousing. The site, 2.76 acres, is enormous compared to the size of the existing building, so I’m sure it will be a better use of the property.

Farewell, RV and Off Road. You no doubt left a larger mark on the world than this blog post, and probably did so with big tires, but you are memorialized here anyway. 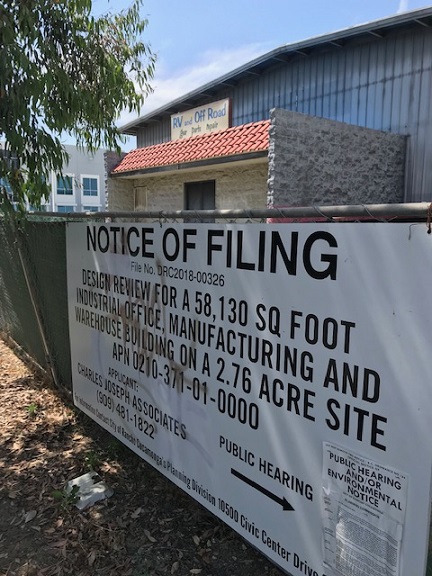 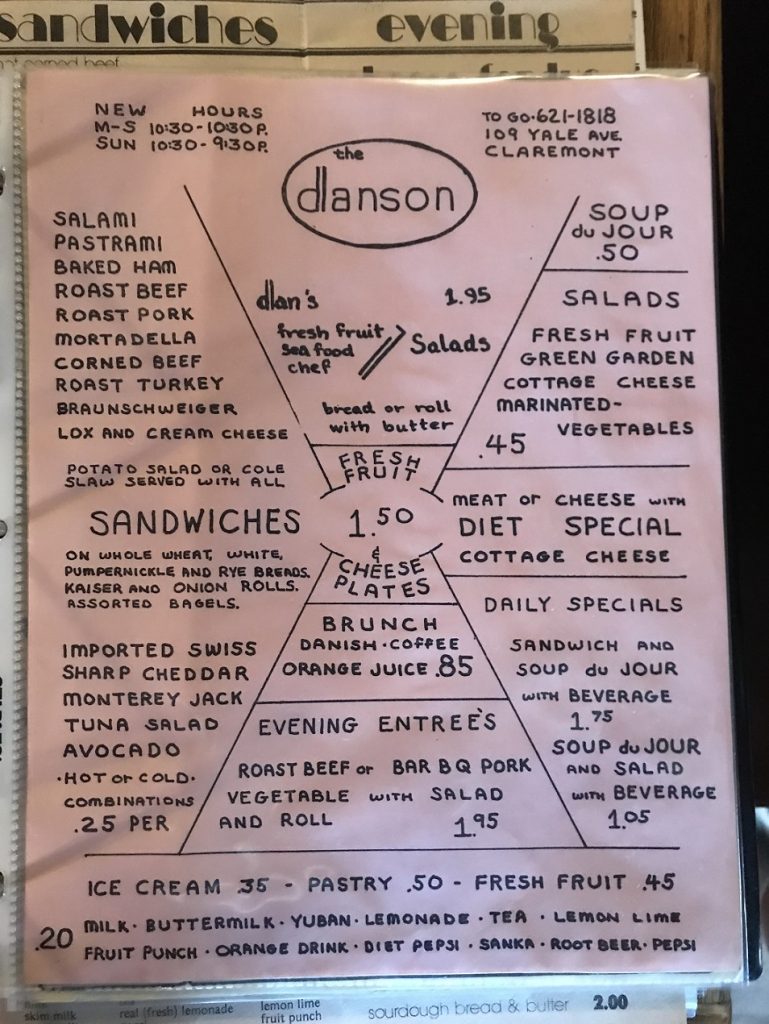 Happy 80th birthday to Dan Sauter, the man who founded The Danson restaurant in Claremont (1973-2005, now operating as Espiau’s). More importantly, his restaurant established new criteria for how to run a restaurant in downtown Claremont: Sunday hours, outdoor seating, beer and wine. He’s the subject of Sunday’s column.

Above, an early menu for The Danson. Click on the image for a larger view.