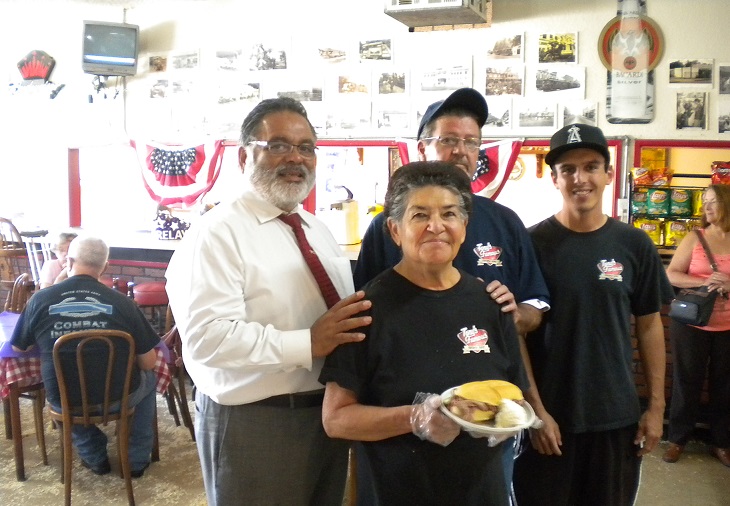 Wednesday’s column is on Tony’s French Dips in Pomona. It was the subject of a Restaurant of the Week post here in June, with a writeup and photos, which you can read here. Above, from left, Cedric Elias, Angie Campos, Raymond Gordon and Robert Nabarrete. 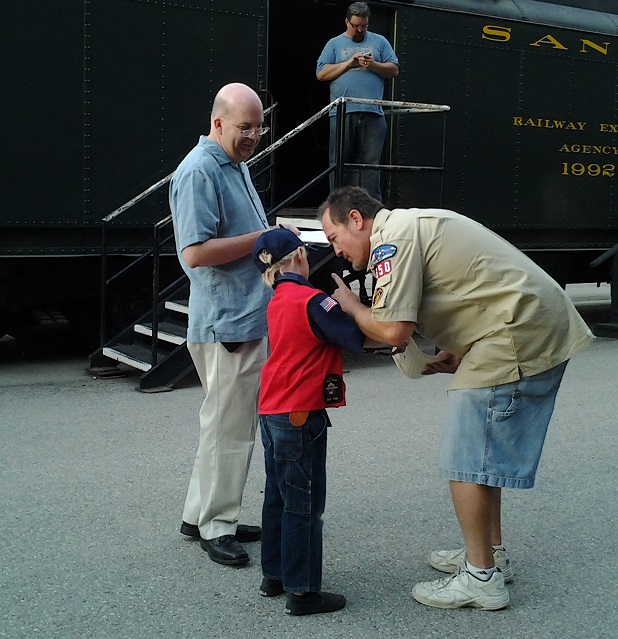 At Fairplex last Thursday for a Cub Scout tour of the RailGiants Train Museum, I tried interviewing Gerhard Kramer’s 7-year-old son, Elijah, with spotty results, even with dad’s help. “I liked it” was Elijah’s most pithy remark, but my attempts to get him to elaborate failed, hilariously.

Trying to keep a child’s attention and elicit a comment is among journalists’ most difficult tasks. Someone captured the moment and Kramer forwarded the photo. He commiserated: “Eventually you’ll get the hang of interviewing!” Yes, eventually.

A column on the exhibit is forthcoming next month.

When the matter of the reduced number of comments on this blog came up, many of you regulars responded, and thank you for that. And nobody should feel obligated to comment if they have nothing to say. Comments are, of course, encouraged, and encouraging.

Reader Denise Pappas responded on Facebook: “On your blog you said that ‘the decline in comments has me puzzled.’ It could be that the change in format has some of US puzzled. As soon as I figure out HOW to post — someone changes the format. LOL, Perhaps you could post some lessons for those of us who are computer challenged.”

She added: “You have to sign in with ‘Disqus.’ When I was your age a ‘discus’ was something an athlete threw.”

Disqus, unlike our old system, doesn’t require you to decipher and type in a Captcha code to leave a comment, only to create a name and log-in. Which might be a bridge too far for some, but it doesn’t seem unreasonable, and it does weed out almost all the spam.

But! You don’t have to sign in with Disqus. For instance, if you’re on Facebook, like Pappas, you can use that. Reader Doug Evans does. He explains:

“I type my comment first and then click on the Facebook logo” in the string of tiny logos under each post. “A box opens up, I enter my my fb email and password, and then I’m taken back to the blog page, where a button has appeared: ‘Post as Doug Evans.'”

Clear? Or clearer, at least? Since we know you’re on FB, Denise, there goes your excuse for not commenting here. One can also sign in via Twitter, Pinterest and a few more social media options that appear in that string.

Sunday’s column is nothin’ but items. Hope you like ’em.

The house at 1105 N. College Ave. in Claremont, subject of a column last July, may have a surprise purchaser: the University of La Verne. Friday’s column has the scoop. 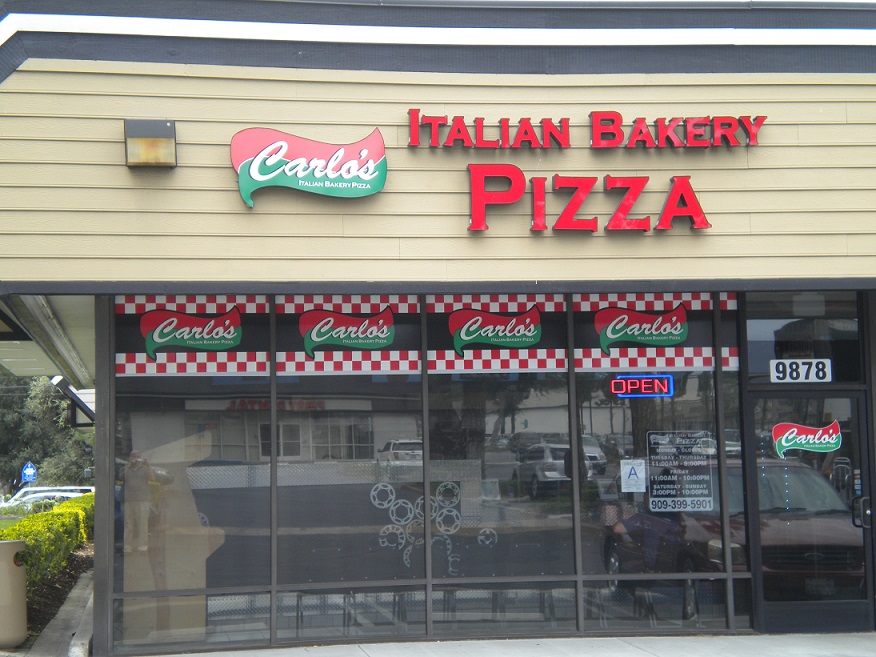 I’ve noticed the relatively new Carlo’s while driving past on Central and, curious, arranged to meet a Montclair friend there for lunch. I had thought we’d be splitting a pizza, but Carlo’s sells pizza by the square, a good lunchtime size, so we did that.

Pizza is also sold by the tray, enough for a family ($15, with 16 squares), and they also have traditional thin crust and specialty pizzas. In addition, the menu has meatball and baked Italian hoagies, a couple of salads and cannoli.

Preparation took about 10 minutes, as they’re making your pizza almost to order. With almost no seating, only a short counter with stools, you may want to take your food to go. The pizza was not my favorite, but not bad at all, and the roll, soft and layered with pepperoni, was tasty. It was a satisfying, and cheap, lunch, and it’s hard to eat anywhere for $5 these days. Worth a try. 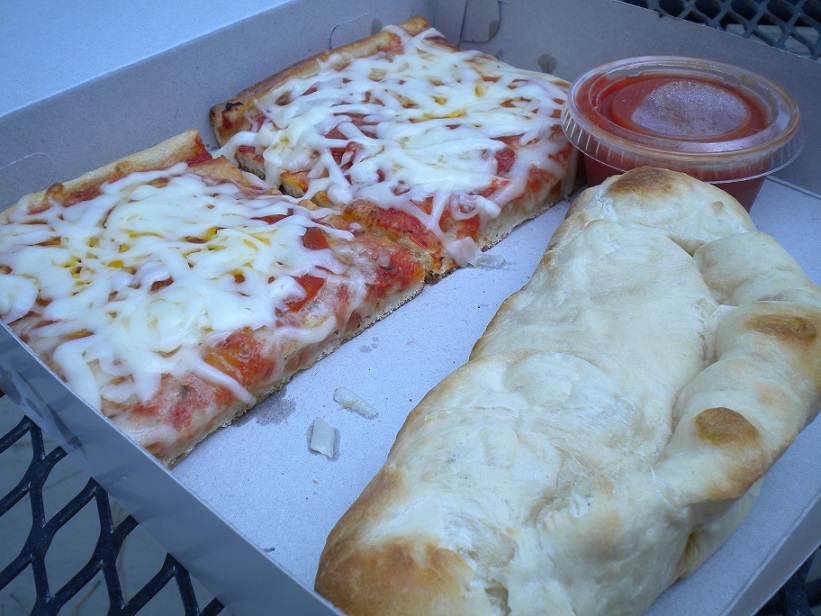 Wednesday’s column is about Monday’s Upland City Council meeting, and the “overseas” bit in the headline has a couple of meanings, as you’ll see.

A request to local librarians for information on a visit to Ontario and environs by the royal family of Thailand in 1960 turned up a different but related piece of information.

In 1962, the queen of Afghanistan visited Pomona. Why, we even have photographic evidence. (She’s the woman in the sunglasses, no doubt worn for protection against the harsh Pomona sun.)

According to Kimberley Erickson of the Cal Poly Pomona University Library’s special collections department: “Here is a photo taken Sept. 15, 1962, during the Queen of Afghanistan’s visit to Cal Poly Pomona. The Queen, Her Majesty Homaira of Afghanistan, is standing next to the Arabian stallion, Poly Royal. Immediately to her left are campus president Charles McPhee and Mrs. McPhee.”

The horse was named Poly Royal? The queen must have felt right at home among fellow royalty.

So what was with all the Asian monarchs — Afghanistan, Thailand — traipsing around out here in the Kennedy years? That I can’t answer. 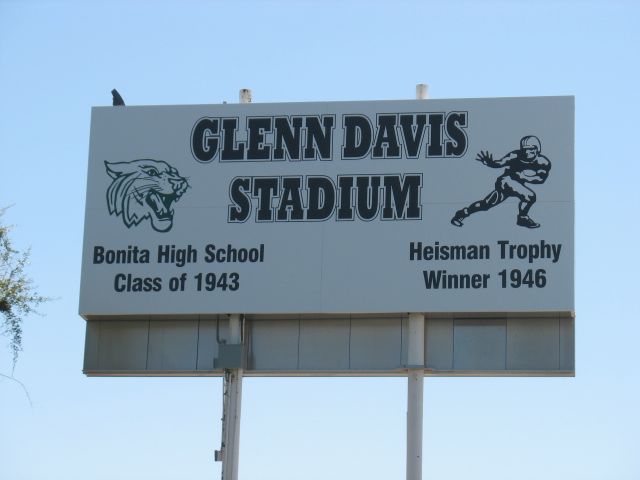 Sunday’s items column begins with word that a scene for Paul Thomas Anderson’s latest movie was recently filmed in downtown Pomona. It’s based on a Thomas Pynchon novel. A video by Pomona’s Ren of the shoot shows how rain effects are created on a sunny day.