My latest column begins with an anecdote from my mini-vacation involving my car that I liked but that I’d cut from my first column for space reasons. Then we segue into reader comments on my columns about Joshua Tree, its national park and the bookstore in Twentynine Palms. It all ends with an item from Upland — that involves the desert. All that is in Sunday’s column.

Writer Keenan Norris, who grew up in Highland and now lives in Oakland, shows me around places in Highland and San Bernardino with special meaning for him in Friday’s column.

Catching up on my mail, I summarize some comments about Riverside’s Mount Rubidoux and others about the Claremont shoe cobbler, as well as present a desert-themed brief item, all in Wednesday’s column.

Trivia note: My initial Rubidoux column was my most-read online in January, and my two follow-ups were likewise my most-read in February and March. I can’t explain it, but I won’t fight it. 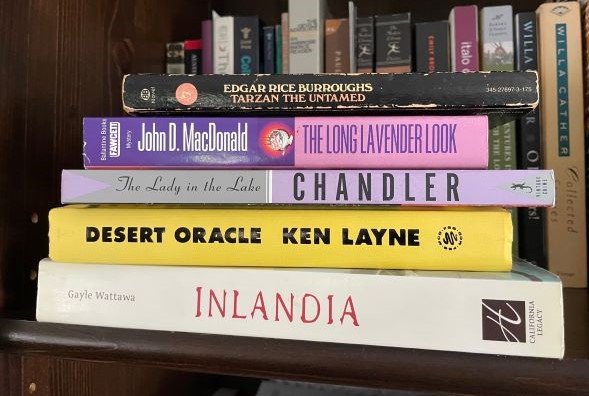 We’ve made it this far, one-third of the way into 2021, a full year plus some change through the strangest collective period of our lives. How are you holding up? Do you have at least one vaccination yet, if you’d care to share?

Personally I’m in a more positive frame of mind than I’ve been in a long time. It seems almost unimaginable that such formerly routine but recently outlawed activities as seeing a movie or eating in a restaurant are now possible again — although I’m doing little of the latter and have no immediate intention of doing the former. The ability to browse in a bookstore is thrill enough for now.

I read five books in January, five books in February and, now, five books in March, a pleasing number to be hitting. If I keep this up the whole year, that would be 60 books, the most in several years. Well, we’ll see. One month at a time. A bit discouragingly, I ended up acquiring six books in March, one more than I read; those included two purchases with a birthday gift card, two purchases while on a short vacation and two birthday gifts. Understandable, I think. But with a yawning backlog still ahead of me, I’ll try to refrain from irrational exuberance in April.

Keeping to my stated goal, in March I again read one by ERB (Edgar Rice Burroughs) and one Travis McGee mystery by John D. MacDonald, as well as two examples of Inland Empire regional writing and a classic hardboiled mystery.

“Inlandia” (2006): A model of the form for regional writing, with examples famous, forgotten, obscure and original. Didion, Steinbeck and Chandler are here, and so are poets, essayists, short story writers and others, representing various cultures who’ve called the area home. This anthology deepened my understanding of the two-county area and provides breadcrumbs we can follow. (After the two chapters excerpted from “The Lady in the Lake,” I bought a copy; see below.)

“Desert Oracle” (2020): Drawn from the small journal of the same name, these true (or semi-true) stories of lights in the sky, ghost towns, eccentrics, lost hikers, monsters, hibernating birds and rumored presidential summits with aliens is a real desert trip. Geared toward readers who delight in history, lore and esoterica. Layne’s prose is dry, wry and conversational. There may be one or two too many UFO stories.

“Lady in the Lake” (1943): Philip Marlowe leaves the mean streets of LA on a missing-woman case that takes him to a lakeside mountain cabin (in real life, our Lake Arrowhead or Big Bear). Suddenly he’s also investigating the formerly-missing-now-found corpse of a different woman. Are the two cases connected, you ask? Hey, is the pope Catholic, and does Raymond Chandler write beautiful sentences? All of that is true.

“Long Lavender Look” (1970): In this 12th entry in the series, McGee is back in Florida but out of his element as he and his pal Meyer are briefly jailed on suspicion of murder. He’s his own client for a change as he has to clear his name and avenge Meyer’s beating at the hands of a drugged-up cop. Also, you get gems like this about a hardware store: “Old men were browsing through the hand tools and cupboard latches, spray cans and wallboard just as, in the world of long ago, they had prowled the candy store to find out how best to spend the hoarded dime.”

“Tarzan the Untamed” (1919): This seventh entry in the series (and the first I’ve read in seven years) starts with a bang, as the Greystoke compound is attacked while Tarzan is away and his wife killed, setting him off on a grim mission of vengeance that continues into the next novel. It’s the prose equivalent of a reboot. The action rarely lets up and various strands of the plot come together satisfyingly. When ERB finished writing, he should have beaten his chest and issued a victory yell.

This was a good month: I’d give everything four stars (out of five) except three stars for Desert Oracle, still a respectable rating.

Back in 2006 I got a pre-publication copy of “Inlandia,” which I paged through but never read, picking up this final copy at Magic Door Used Books in, probably, the late ’00s. Satisfying to finally read it, and it’s already been useful to my expanded column territory. I think I read it at the right time. “Tarzan” dates to the late ’00s as well from St. Louis’ Book House. “Lavender” came from North Hollywood’s Iliad Bookshop in 2012. “Oracle” and “Lake” were bought new earlier this year at Los Feliz’s Skylight Books. For me, a fast turnaround.

I’ve surprised myself by sticking to my ERB/McGee plan, at least through the first quarter of the year. (Nice to be able to mix things up a bit with ERB, as I have a few Tarzans as well as all the John Carter of Mars series to read.) While on one hand they’re consuming half of each reading month, and thus cramping my freedom, they’ve been a bedrock for each month and reading them is getting me through a logjam of titles on their respective bookshelves. And there’s been time for unrelated books, including “Inlandia,” which I’d been reading on and off for a few months before powering through the last half in March.

In fact, completing that 450-pager makes me want to tackle a few other literary anthologies on my shelves this year, including the nearly 900-page “Writing LA.” It’d be simpler to just devote an entire month to it, but more likely I’ll nibble away at it over much of the year.

How was your March, readers, and your first quarter of 2021? Are you sticking to your reading goals, if any, falling short or straying? Let us known in the comments, please.

Next month: Me blog pretty next time. 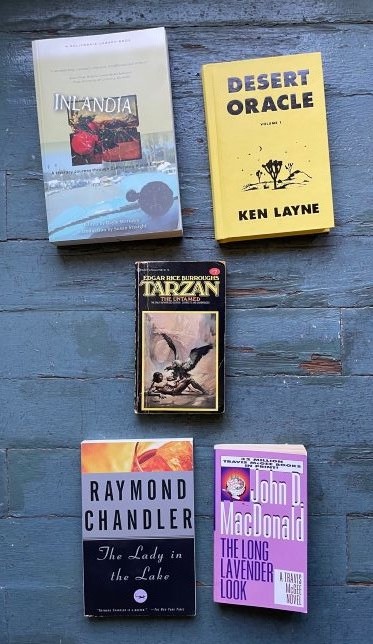 The desert’s small towns have a surprising number of bookstores. I focus on one in Twentynine Palms, Raven’s Bookshop, after interviewing the owner while I was on vacation next door in Joshua Tree. The store and its delightful history is the subject of Sunday’s column.

Did you know children’s author Beverly Cleary came to Ontario to attend school? Well, you may if you’ve been reading these columns long enough. But her death last week is a good reason to bring it up again. That and a Riverside County brIEfly item make up Friday’s column.