Friday’s column begins with an unexpected local angle to a national story and continues with a Pomona joke from a 1950s “Burns and Allen Show” episode, more about Inland Empire nonfiction books and a short item with a 909 slant from Alaska.

I attend a party for a woman turning 100. Does Emmy Lou Berryman have deep local roots? At 17, she was “Queen of Fontana” at the town’s silver anniversary. In 1938. And she’s lived in her Ontario house for 70 years. I write about her in Wednesday’s column. 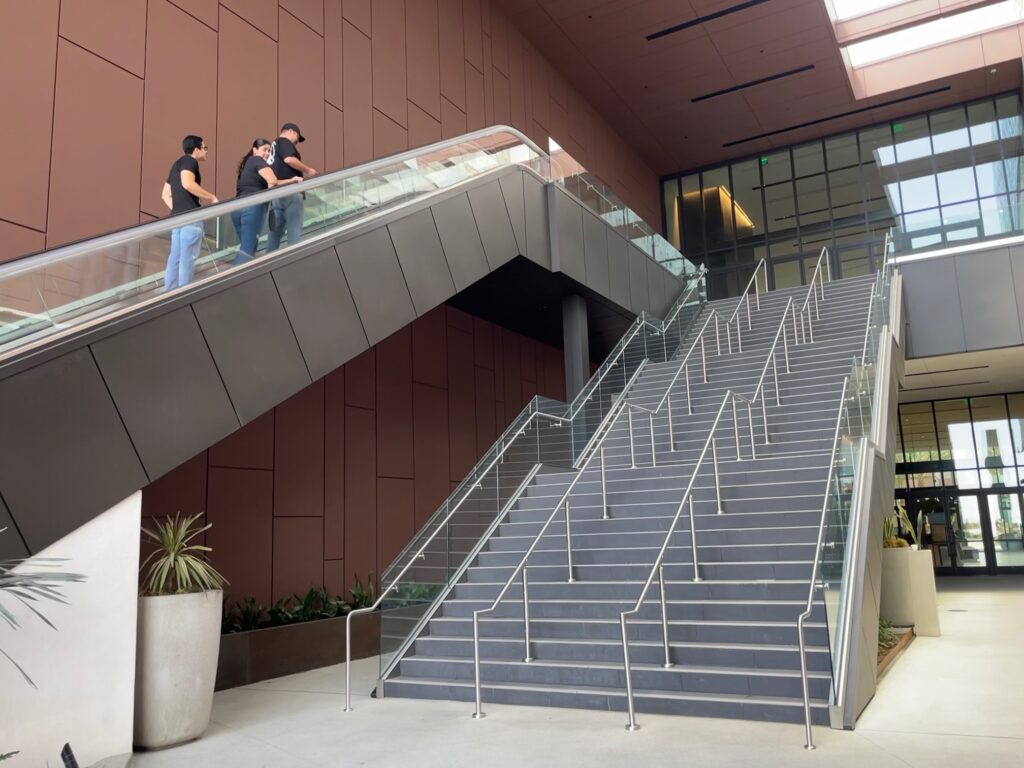 As you may have gleaned from stray references in a few columns, I’ve gotten into climbing stairs daily, which isn’t easy to do when you live in a single-story home. This means I’m always on the lookout for stairs. At Montclair Place mall recently, I was leaving Barnes & Noble by its parking lot entrance when I spotted this impressive new set of stairs a few paces east leading to the upper-level AMC theaters — and gasped.

I went up and down five times. How many steps? I counted. Something like 42. Each trip up counted as two flights on my fitness app. This has to be the best semi-public staircase in Montclair, if not in many of our cities.

Only one other person, who looked like an AMC employee, took them while I was there. Everyone else lazily used the escalator.

Picking up where I left off 14 months ago (!), when I wrote about the Rolling Stones’ third (of four) concert appearances in San Bernardino for its 55th anniversary, I give the same honor to their fourth and final appearance — July 24, 1966 — in Sunday’s column. Rock history must be served!

There are dozens upon dozens of local history books, including all those photo books about individual cities. But is there any serious nonfiction about the Inland Empire? A Twitter thread of recommendations led to Friday’s column.

Visiting all 30 Major League ballparks is a nice idea and a good way to see the country from stem to stern, but it would take more dedication and vacation time than most of us have. I’m at 11. I have friends who’ve been to 13 and 17. A Menifee man tells me he’s been to 27, and only to see the Dodgers — speaking of dedication. I write about all this in my Wednesday column. 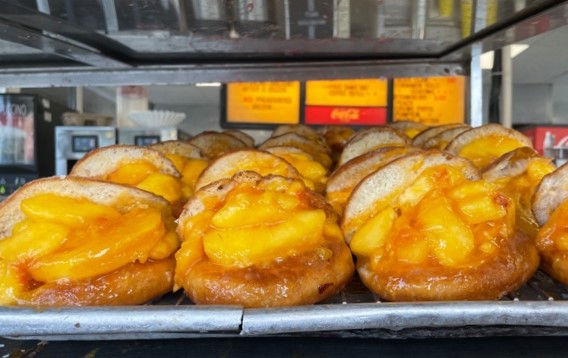 Many of you know about Donut Man’s strawberry donuts. It’s the Glendora (and, now, Grand Central Market in DTLA) shop’s signature item, available about half the year. Less heralded is the fresh peach donut, available for only two or three weeks per year.

Personally I like the peach better. Is that due to its taste or its scarcity? More the former, I think, but the latter has something to do with it. Peach is the underdog (the underfruit?), the taste the masses don’t know about. Every summer I try to get at least one peach donut. Once I delayed too long and missed out. Hashtag: #neveragain

Donut Man announced Friday morning on Facebook that peach was back. On Sunday morning I was in line in the Glendora parking lot.

I had a 45-minute wait simply to get a single donut, since many in line ahead of me (and, eventually, behind me) were getting a dozen or more, and only one window was staffed. That’s fine; I read my Daily Bulletin standing up. And the donut was worth it. You might blanch at $5 for a donut, but then, how often do you get a giant donut split down the middle, stuffed with about 6 ounces of fresh, glazed peaches, and served in a box?

In my case, once a year. Or twice, if I manage to go back. 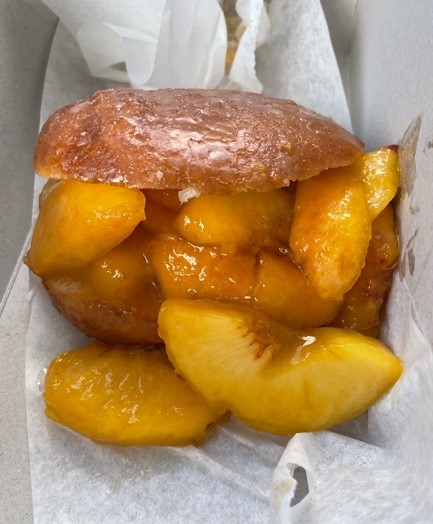 It’s a grab-bag of items. Readers share memories of North Hollywood after my recent column, my praise for a used bookstore that I’d said was the biggest and best is qualified, recollections are sought from anyone who attended the 1966 Rolling Stones concert in San Bernardino, the Fonzie statue in Milwaukee leads to a mention of a TV sitcom film site in Claremont, and a top pop singer hails from Murrieta. All of this — whew! — is in Sunday’s column.

Some readers have had easy airline experiences this year, others have had terrible ones and some are simply avoiding air travel. I write about their varied experiences, with some of my own, in Friday’s column.