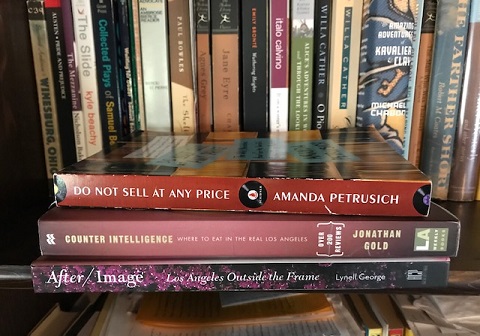 Books read: “Do Not Sell at Any Price: The Wild, Obsessive Hunt for the World’s Rarest 78 rpm Records,” Amanda Petrusich; “Counter Intelligence: Where to Eat in the Real Los Angeles,” Jonathan Gold; “After/Image: Los Angeles Outside the Frame,” Lynell George

Belated January, readers. I can’t say I’m particularly excited to share my reading from January, for a couple of reasons. I finished the last book on Jan. 13, which seems like forever ago, and a bout with pneumonia, from which I’m still suffering as I type this, has not only separated this Reading Log further from my actual reading but sapped me of the usual enthusiasm.

Well, we must muddle on, mustn’t we? So here are summaries of my three January books, none of which have any relation to any other, other than their all being nonfiction. Huh, and December was all nonfiction too, wasn’t it? What is happening to me?

Do Not Sell (2014): Why does a tiny subset of collectors focus on obscure music in an outdated form, 78 rpm records? It’s probably half about the content and half about fetishizing the past, Amanda Petrusich concludes after her deep dive (which includes an actual scuba excursion into a river in search of 78s). Still, she decides they’ve done the world a favor by rescuing blues, jazz, country, gospel and other music that would otherwise have been forgotten. Her exploration of this subculture is carefully observed, affectionate and, naturally, very funny.

Counter Intelligence (2000): Jonathan Gold’s only book to date, collecting some 290 reviews from the ’90s. I could never figure out how or why to read it. But then he died, I pulled it off the shelf and read one or two reviews nightly for roughly seven months, and that was perfect. Outdated, sure, but many spots are still in business, and the reviews are enlightening about different cuisines. Sometimes, they’re mic-drop hilarious: “I’m all for stately homes, but if hungry people had political clout, Hong Kong Low Deli is the kind of thing the city’s Cultural Heritage Commission might be dedicated to preserving instead of a bunch of old buildings that don’t even have restaurants in them.”

After/Image (2018): This collection of essays, reportage, memoir and photographs never cohered for me. Whoever wrote the back cover and inside flap seemed to struggle as well to sum up what the book was about. Lynell George, a journalist formerly of the LA Times, has thought a lot about L.A., but possibly too much; she seems offended that over four or five decades, L.A.’s built environment has changed and newcomers want to write their own stories. (Also, there must be an average of one copy-editing mistake per page, mostly involving oddly placed, punctuation. And yes, that comma was intentional and an example of what I mean.)

That’s that for the summaries, and I suppose I did all right at that. “Do Not Sell” came used from Powell’s Books in Portland in 2016, “Intelligence” was bought used at Glendale’s old Brand Books circa 2006 and “After/Image” was a birthday gift last year. It was the thought that counted.

What did you read in January, readers? Also, as this is the first Reading Log of the year, anyone want to share reading goals for 2019?

Mine include reading the last four books from my last Powell’s visit (before visiting again); keeping up with my annual authors Smith, Heinlein and Benchley; and reading my oldest unread books, from the mid-’90s. And yes, I know that sounds ridiculous. I’d like to be finishing off the remainder of my 20th century books, but there are just a few too many. Ah, life.

Next month: modes of transit. 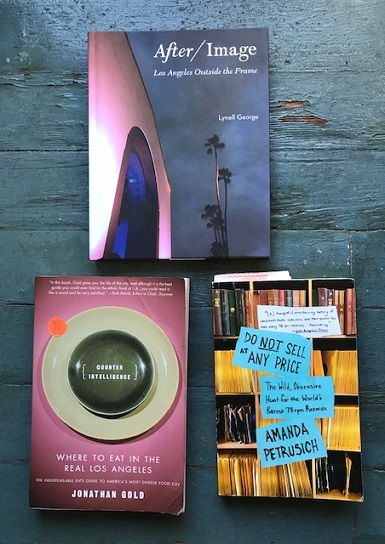 I’m seeing if I can at least work half a day. So far so good. I turned the calendar page over from January to February, an indication of how long I’ve been out. Wish me luck.

Did I say flu? On Sunday, after several days of little sleep, much coughing and zero improvement, I began wondering if I might not have pneumonia, as the symptoms — shortness of breath, coughing and fever — matched mine. One visit to the emergency room and one chest X-ray later, my diagnosis was, alas, confirmed. (My bill to myself will be in the mail.)

I’m resting at home with an antibiotic and an inhaler and beginning to gain appetite and strength. Not sure when I will be back at work, but hopefully next week, if not in time for a Sunday column. Wish me well and pine, please, for my return.

It was 60 years ago today — Feb. 3, 1959 — that Ritchie Valens died in the plane crash that also killed Buddy Holly and the Big Bopper. I use the anniversary as the springboard to present my research into the two concerts Valens gave in — where else? — good ol’ Pomona. That fills a longer-than-usual Sunday column.

Readers, I came down with the flu Sunday night and have pretty much been out of commission ever since. Thus, no column Wednesday or Friday, and no Restaurant of the Week or other posts here. That said, I’ve pulled myself together to write a Sunday column, because its topic absolutely had to be covered that day. I hope to be back with a Wednesday column too, after a weekend of taking it easy, but we’ll see.