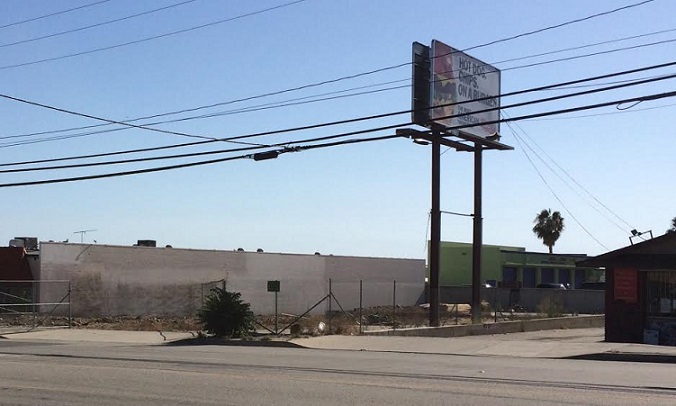 Above, the vacant lot where Mustang Books used to stand.

In January I posted about the demolition of Mustang Books, a long-standing dirty book emporium on Upland’s Central Avenue. But that wasn’t the first business in that building. Michael Guerin, who was the subject of a 2012 post about the Grove Theatre Pal Club of his youth, emailed me about more innocent shop of the 1960s. Take it away, Michael:

“Every time I pass the site of the former adult bookstore on the west side of Central just south of Foothill I am reminded of an earlier hobby shop that occupied the building.

“It was the 1960s and the concrete block building at the front of that lot was owned by a man named Don Domes and operated under the name Don’s Hobby Hut.

“This was at the time the only decent place to buy model cars and airplanes, early remote control aircraft and other hobby stuff.

“Don was a trendsetter in that he even had discontinued Revell or Monagram plastic model kits up on the high shelf available for some exorbitant price for those that were real aficionados.

“That place may have kept me alive in my elementary school years even into early teens.

“I don’t know that anyone’s mentioned it and it certainly doesn’t show any Google searches but I thought I would reminisce about it anyway in case it comes up in other conversations about local history.

“I think it closed down in the late ’70s or early ’80s and later as we all know it became a hobby shop of a different sort before being closed down and later bulldozed.”

Thanks, Michael. Now, if someone ever Googles “Don’s Hobby Hut Upland,” they’ll get one useful result.

Update, September 2017: Richard Wolfe emailed after finding this post on Google. He said as a boy he practically lived at the store, spending his allowance there every week. His best friend lived in an apartment above the store. “I thought this was the coolest thing ever,” he said. Eventually he did work at the store after its move from 8th Street to Central Avenue, and briefly owned it in the early 1990s, until the economy and other issues shut it down.

Wolfe, who now lives in Redlands, hadn’t known the building had been torn down until having a dream that it had been torn down, and then finding this post and learning it really had been demolished. That’s the way it goes sometimes, doesn’t it?