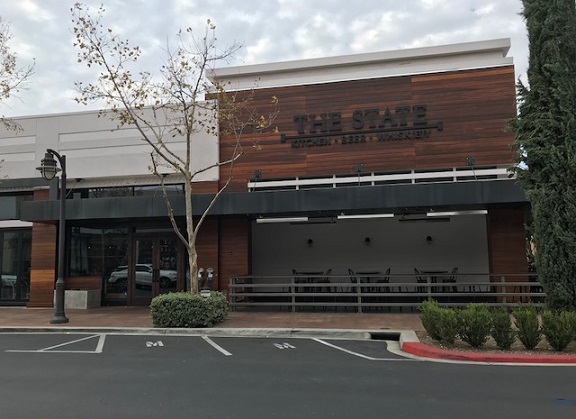 The Redlands gastropub The State (it’s on State Street) has expanded west to Victoria Gardens, where it took over the old Ra Pour space. Three friends and I had lunch there in December.

It’s a large spot with an oblong main dining room and then a patio. (It was a cold afternoon and we didn’t investigate the option when asked “would you like to eat outside?”) There’s a full, elaborate bar with cocktails and more. The motto: Kitchen * Beer * Whisk(e)y.” 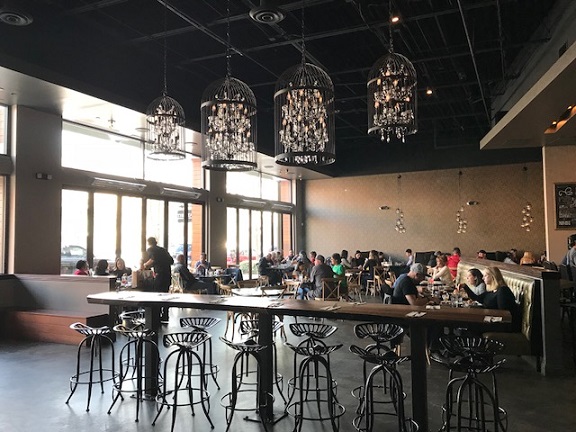 Between the concrete floor and the cranked-up music, one friend said: “My first comment: ‘loud.'” We could hear him, though. And as at that point they were playing such soul oldies as “I’m Your Puppet,” “Try a Little Tenderness” and “Kiss and Say Goodbye,” it wasn’t in me to object.

The menu has upscale versions of classic comfort food, but other items too: starters, salads, burgers, sandwiches, main courses and desserts. (One unappealingly named entree is Airline Chicken — although surely it’s a better version.) 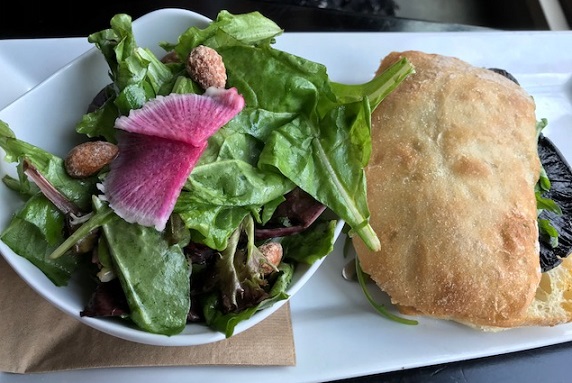 Two got the portabella sandwich ($12), one with a salad as the side (free), the other with fries ($1). Both called it “average.” The bread looks great. 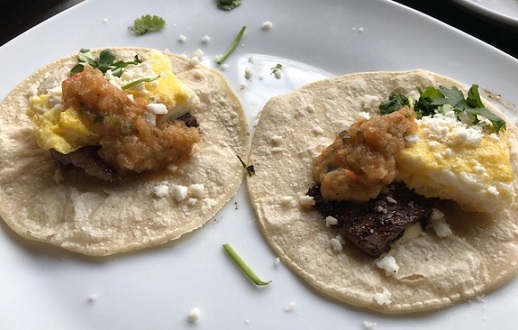 Another got steak and egg tacos ($8), which the server cautioned would be small as a main course. The warming proved accurate, although they were enjoyed. 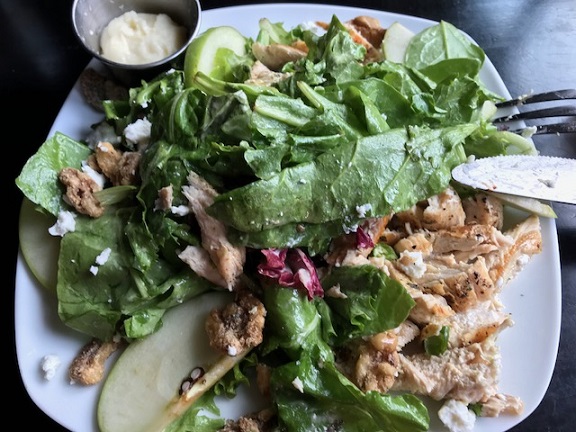 I got the apple harvest salad with chicken ($11 + $4), light and tasty, and some of us shared the poutine ($13), the Canadian comfort food of fries topped with cheese curds, braised short ribs and gravy. That was a real winner. “I would definitely come back” and “delicious” were the comments. 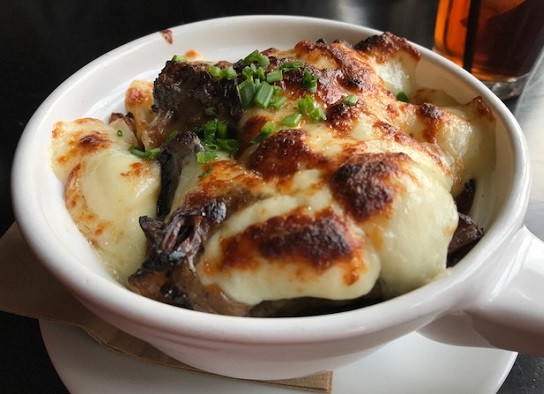 Meanwhile, TVs silently played “Casablanca” — easy enough to fill in the dialogue on that — and other old movies or clips. Nice backdrop. The state of The State is strong. 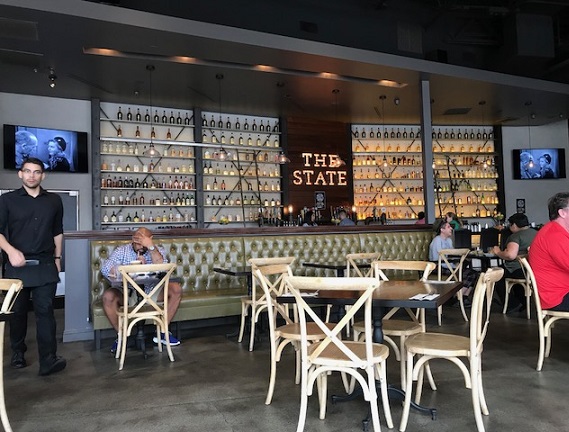 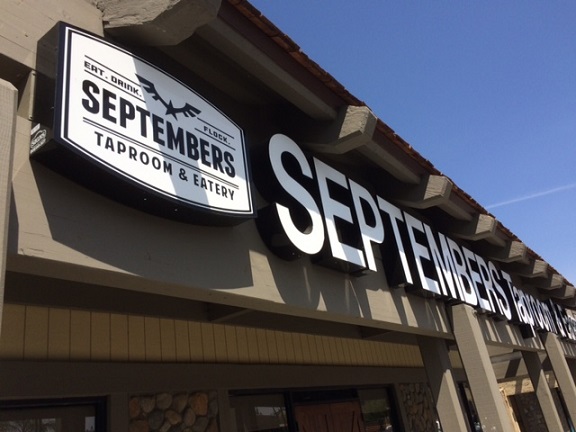 In the old McAlan’s Pub building in the Trader Joe’s and Vons centers, Septembers is a welcome gastropub with local brews and better than average food, concentrating on classic American sandwiches.

Reader Dave Paniagua, who had earlier drawn my attention to Ontario’s Corner Deli, alerted me to Septembers, and since I’m now a regular at Corner Deli, I took his tip seriously.

Septembers is quiet on a lunch hour, with a few people around the bar and only a few diners. They have beer and wine, plus some cocktails. The interior is pleasantly industrial, with high-top and regular tables under an exposed ceiling, distressed wood walls and corrugated steel accents. 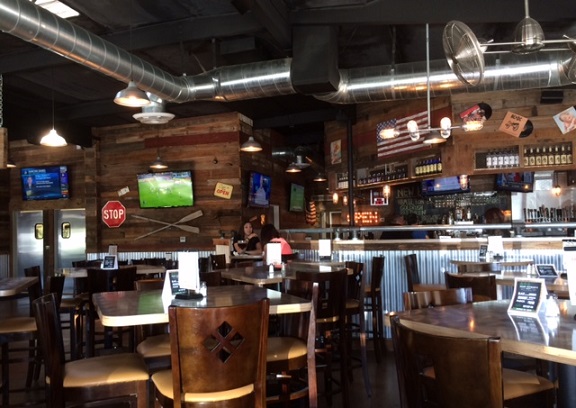 Virtually everything on the menu was potentially of interest to me. 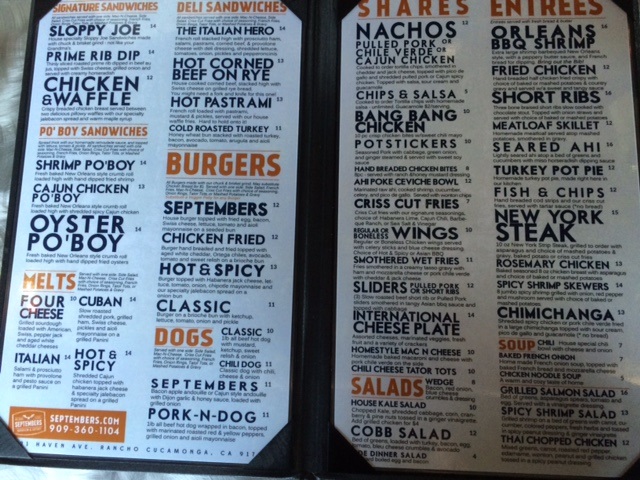 Well, not nachos, but you get the idea. It’s a a well-designed menu, too, isn’t it?

They have several set lunch specials, all for $8. First time I got one of those, a grilled chicken sandwich with fries. It was good enough that I returned the next week to order off the regular menu. I got a sloppy joe — how often do you see that on a menu? — that was made with chuck and brisket on a long roll ($14, first photo below). An excellent version of the old-school classic. The criss-cut fries, with your choice of seasoning (I got sea salt and vinegar), were addictive.

Next visit I got a shrimp po’boy ($14, second photo below). Served open face, it was overstuffed and strictly knife and fork. Good, yet maybe too much of a good thing. The side of mac and cheese was excellent.

I’ve gone back three times since, making this one of the best-researched Restaurant of the Week posts ever. The Italian panini melt ($14) was a little boring and so big I couldn’t finish it even if I’d wanted to. The classic burger ($11, third photo below) with onion rings was very good; two onion rings don’t sound like much, but they were very large. That time I finally had room for dessert, getting the apple crisp a la mode ($5, bottom); as you can see, they didn’t skimp on the ice cream. And most recently, the fish and chips ($12) were meaty.

I’m not a drinker, so in that sense this may be the most poorly researched Restaurant of the Week ever, but I can tell you they have local brews such as Dale Brothers and Hangar 24. Margaritas are $3 on Mondays, wines are $3 on Wednesdays and you can get a $6 sampler paddle of beers on Thursdays.

If no dish has wowed me, everything has been solid, and my impression of the place is positive. I appreciate that the chefs are using quality ingredients and raising everything up a notch. A sandwich and an iced tea will set you back about $20 with tax and tip. If you can splurge a little, it’s worth it. 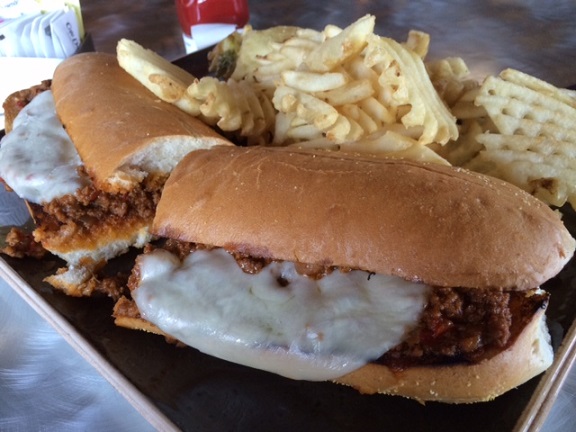 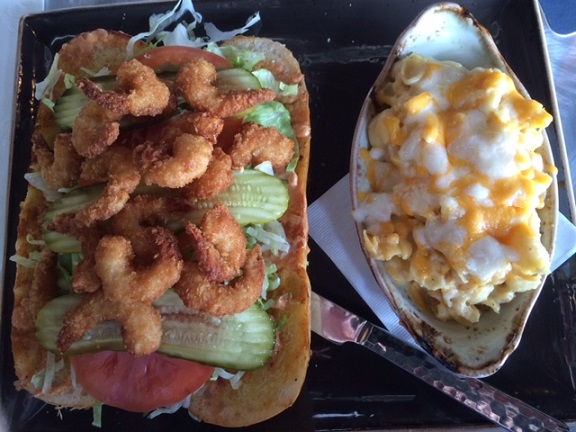 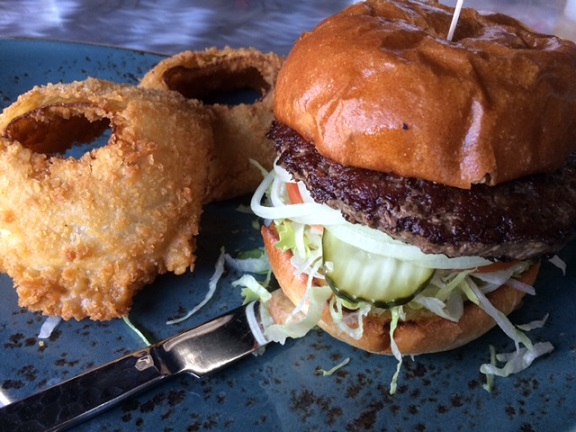 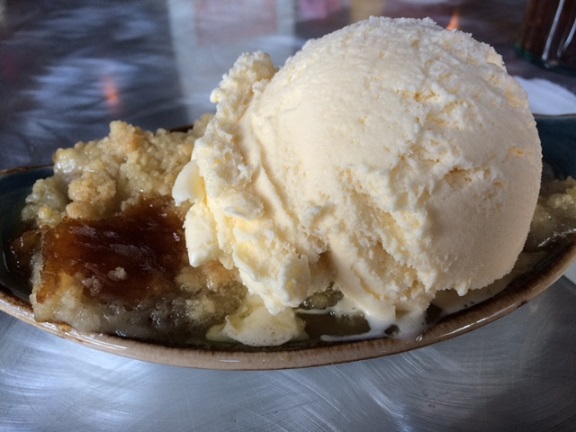 The Back Abbey opened in June 2008 behind the Laemmle theater in Claremont’s Village Expansion. The building, which dates to at least the 1920s, was an ice house that chilled citrus bound by rail for other states. The small, distinctive structure was saved when the Expansion was being planned and sat, window-less but full of promise, until early this year when renovations began.

Well, it’s a neat little building and the Belgian pub that occupies it is a great addition. A friend and I went in for dinner a few days ago. It has a lived-in look, dark and rustic. The metal rafters are exposed and the hanging lights look industrial. There are tables inside, and one long high table with bar-style chairs, good for individuals, plus seating outside.

The beer menu apparently doesn’t exist. The food menu is on a chalkboard posted high above the bar. It consists of salads, burgers and bratwursts. It’s upscale bar food.

I had the Back Abbey Burger (at $13, possibly the most expensive burger in the Inland Valley) and my friend had the Grilled Vegetable Burger ($11), a portabello mushroom with eggplant, feta cheese, zucchini, red bell peppers and another item or two I got tired of craning my neck to read off the menu. It proved far more interesting than a Gardenburger.

My burger came on a brioche bun and had mustard aioli, microgreens, caramelized onions and a type of bacon whose proper name I couldn’t read. Well, it was a heckuva burger and worth the $13, if you’re the type of person who doesn’t blanch at a double-digit burger. 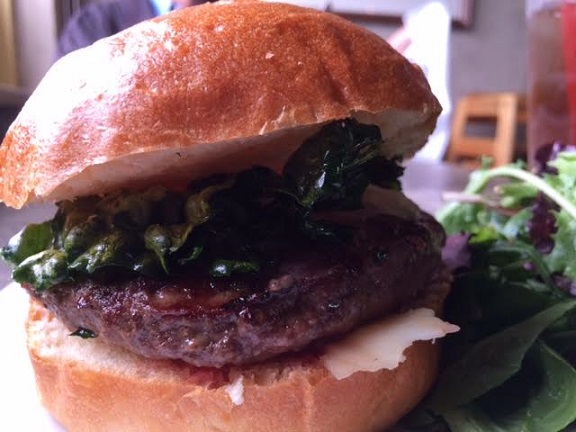 The presentation and price, not to mention the setting, invite comparisons to Father’s Office in Santa Monica and Culver City.

The half-order of fries I can recommend unreservedly. They come in a paper cone with three dipping sauces. The sauces are OK; the fries are amazing.

As for the beers, the Abbey has some 30 Belgian beers on tap. This is apparently A Big Deal in the beer community, Belgian beer being considered among the best and having it on tap being a rarity. There’s no beer list, annoyingly, so you may be hard-pressed to know what to get. My friend tried a couple and liked them. Beer doesn’t appeal to me and a sip of one didn’t change my mind.

But if you’re into it, Back Abbey is almost like a wine bar for beer. It’s very non-909 and Claremont’s lucky to have it. The clientele ranged from the 20s into the 60s that night, and it will be interesting to see this fall if Claremont Colleges students adopt the place and its $7 to $9 beers or whether it remains more of a beer snob/foodie hotspot.

About my only criticism is that it’s very LOUD. It’s not TVs, it’s not music, it’s just conversation that makes the interior almost as noisy as a nightclub. I don’t know if there’s anything to be done about it, other than timing your visit to off-hours.

You can read reviews on Yelp and on the M-M-M-My Pomona blog.

Update 2016: I go here two or three times a year and have yet to have a bad meal. At lunch on a weekday, it’s sedate, and there’s a nice outdoor seating area too.